Summary: In this exciting international thriller featuring Japanese antiques art dealer and PI Jim Brodie, a double-murder at the Kennedy Center forces Brodie into a dangerous game of espionage—putting him in the crosshairs of the Chinese, North Korean, and American governments.

Jim Brodie is an antiques dealer, Japan expert, and second-generation private investigator. When two theater friends are murdered backstage at a Kennedy Center performance in Washington, DC, he’s devastated—and determined to hunt down the killer. He’s not the only one.

After the attack, Brodie is summoned to the White House. The First Lady was the college roommate of one of the victims, and she enlists Brodie—off the books—to use his Japanese connections to track down the assassin. Homeland Security head Tom Swelley is furious that the White House is meddling and wants Brodie off the case. Why? For the same reason a master Chinese spy known only as Zhou, one of the most dangerous men alive, appears on the scene: Those murders were no random act of violence.

Brodie flies to Tokyo to attend the second of two funerals, when his friend’s daughter Anna is kidnapped during the ceremony. It is then Brodie realizes that the murders were simply bait to draw her out of hiding. Anna, it seems, is the key architect of a top-secret NSA program that gathers the personal secrets of America’s most influential leaders. Secrets so damaging that North Korea and China will stop at nothing to get them.

Publishers Weekly said, “Readers will want to see more of the talented Jim Brodie,” and The Spy Across the Table is an edge-of-your-seat thriller in Barry Lancet’s wildly popular and highly acclaimed series.

I was very excited to read this book! I’d been wanting to read the books from the Jim Brodie series every since I first heard about them, but my reading schedule never allowed it. Some of you might remember that I hosted a giveaway for the third book in the series Pacific Burn, but sadly was lacking the time to read it. Well, I’m quite happy to have had a spot open for the fourth book, The Spy Across the Table, and here is what I thought about it! (I’m also hosting a giveaway for this book with Simon & Schuster, and you can find the link for that in the “giveaway” section below!)

The Spy Across the Table is one of the most intense suspense books I have read so far! The very first sentence causes the reader to tense in preparation for the oncoming action because it foreshadows the occurrence of something very bad happening. Something which cannot be prevented, because for the narrator it has already happened, and he is telling you about it in retrospect. Like this, The Spy Across the Table pushed me to the edge of my seat, and kept me there for the majority of the book! The plot is fast paced, with pauses in sections that are more important and deserve more detail. This book is also written in the first person, which allows us a view of the main character’s, Jim Brodie’s, thought process, as well as his experiences as the story unfolds. The narrative is also peppered with historical facts (or facts made up for the sake of the story, which sound extremely real!)

These bits of history, I found to be quite interesting due to my interest in history as well as Japan, Korea (North and South) as well as China. But I believe that these explanatory bits would be interesting to read even for those who are not as interested in the things I am, and these explications also help one make sense of what is happening in the plot, and why. I also found myself appreciating just how seamlessly Lancet integrated these bits of information into the narrative. Lancet is quite the skilled writer, and storyteller. I also liked how Lancet explained Brodie’s past, as well as what has happened to him in (what I’m assuming was) the previous books (1-3). This helps a reader who jumped in at book 4 to feel welcome, to understand the character, what is happening, and also leaves them wanting to go back and read the previous books! 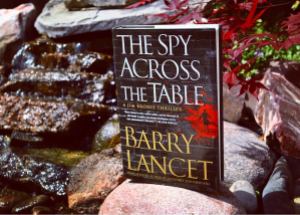 The action scenes in this books were also well-written, and easy to imagine. There were some graphic scenes which I thought that I should mention just for those who cannot handle these things. And there are also love scenes, although they are not in the least explicit. The dialogue was also skillfully written, and helped me to imagine this book as if I were watching a fast-paced action movie. I was also able to appreciate Brodie’s tone as being patriotic, while also understanding (and wanting to understand) other countries and cultures as well. I much enjoyed Brodie’s open-mindedness, while also feeling quite jealous of his being able to spend time in two of my favourite places on earth, Japan and South Korea, despite the not so pleasant circumstances.

Overall this was quite the thrilling ride, and I highly recommend it to those who enjoy a good adult suspense novel! There are twists and turns every few pages, and I quite literally had my nose burred in this book, trying to read as quickly as possible so that I could see what happens next! 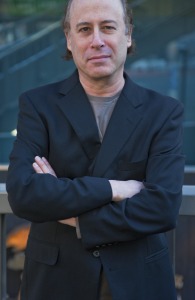 Barry Lancet is the author of the award-winning international suspense series featuring Jim Brodie. The latest entry is THE SPY ACROSS THE TABLE (Simon & Schuster) and sends Brodie careening from Washington, D.C. and San Francisco to Japan, then on to South Korea, the DMZ, and the Chinese-North Korean border in a story that could have been ripped from today’s headlines. In one of the first advance reviews, Publishers’ Weekly said that “Lancet keeps the suspense high through the exciting climax.” The previous entry in the series, PACIFIC BURN, explores the tragic aftermath of the Fukushima quake-tsunami disaster and the real reasons behind the nuclear melt down. JAPANTOWN, the first Brodie adventure, won the Barry Award for Best First Novel, was initially optioned by J. J. Abrams, and is now under consideration at other studios. The second volume, TOKYO KILL, was a finalist for a Shamus Award for Best Novel of the Year and declared a must-read by Forbes magazine. An American from California, Lancet has lived in Japan for more than twenty years. His editorial position at one of the Japan’s largest publishing houses allowed him access behind many closed doors, and his overseas experiences lend his novels a true insider’s authenticity.

Please click the image of the Japanese shrine below
in order to be redirected to the Rafflecopter Giveaway! 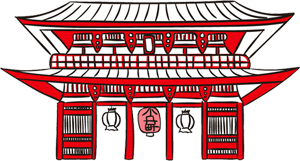