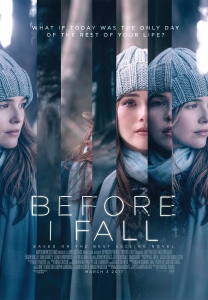 I was invited to an advanced screening of this film courtesy of HarperCollins Canada.

Synopsis:  Sam seemed to have everything a teenage girl could want: popularity, a hot boyfriend, cool status, fun friends, loving family and seeming happiness.  But beyond the superficial, Sam’s life wasn’t so charmed. She was one of a clique of high school mean girls who made life hellish for those different from them.  When she’s killed in a car accident, Sam is forced to relive her last day on Earth seven times in order to get things right.  She attempts to make sense of what befell her and gain a better understanding of herself and others. In the process Sam evolves, learns to be a good person and comes to accept her fate.  As narrated by Sam (Zoey Deutsch), this touching story, based on the 2010 young adult novel by Lauren Oliver, has a Groundhog Day structure, with a dramatic arc.

As I have not read the book upon which this film is based, I just wanted to say that my review will not at all be influenced by the novel. I went into watching this film with no previous information other than what was provided in the trailer! This was the first advanced screening which I was invited to, and I was very very excited to atten

d. My friend an I drove for close to 2 hours in order to watch this screening in Toronto (yeah, we’re crazy), but it was very worth it. We love the big city, and the movie was also quite good.

When we arrived at the theater, about half an hour (although it felt like days) of searching for parking which wasn’t commercial or private, my name was checked on a list and we were let in very quickly and with no fuss (which was a relief especially after our experience with the parking). We settled into our seats and waited for the experience to begin!

The first thing which I noted was that this would be an aesthetically pleasing movie, no matter how good or bad the plot would end up being. I’d heard rumours that this movie was filmed in British Columbia, but I wasn’t sure about that until I actually started watching the film, as I hadn’t looked into it any further. I definitely felt a sense of pride as a Canadian, and found that the landscape scenes were very fitting for the mood of this film.

Lighting, colour, the weather, and scenery were used very effectively in this film to set the mood for the story being told. And those elements were also used very well to convey the individual moods of each scene. I really felt pulled in, not only by the story, but also by the aesthetics and sound.

That is not to say that the story wasn’t also quite captivating on its own! Since watching the trailer, I thought that I had maybe figured an important portion of the plot out on my own, and I was both proud of this and also disappointed that (if I was right), the story would not develop in a surprising manner for me. Alas…I was wrong! And the tale developed in a manner which I did not expect. At all. 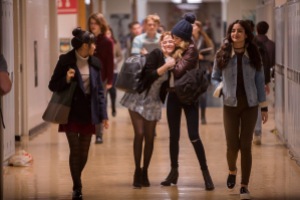 really liked the characters (good and bad) in this movie, and I also really liked the amount of chemistry between them all. All relationships felt complicated and genuine. The only thing which irked me a little was that when the four girls would drive around in a car, the two white girls would sit in the front, while the POC girls would sit in the back. Now, I’m sure this was not done on purpose, and was probably simply due to the fact that the owner of the car, and the girl in the passenger seat (the main character in this story) are best friends. I’m probably reading too much into it…

The thing which stood out to me the most while watching this film was definitely the message which it was trying to get across. Which is basically that you should look beneath the surface of your life; popularity isn’t everything; high school is just the blink of an eye compared to the rest of your life; cherish what you have; and that we should live every day as if it were our last. Though…I suppose that’s more than one message? But in either case, this movie really left an impression on me, and I would definitely join a friend or friends who want to go see it in theaters. And I’d also join friends in watching it on DVD or something when it’s available in that format. Overall, this film was quite good, and I highly recommend it!

The film, based on the popular YA novel of the same name by Lauren Oliver, attracted director Ry Russo-Young for its sense of youthful authenticity and intriguing repetitive structure. “When I read the book I was struck by how powerful Sam’s story was and what interesting questions were raised by the recurring day construct,” said Russo-Young.  The emotional honesty of Sam’s posthumous journey made a strong impression on her. “Lauren Oliver’s ability to balance the emotional and philosophical resonated with me on a personal level, as it reminded me of my friendships at that time in my life, how deep and all-encompassing they were, and the dramatic choices that I felt I was facing at the time,” said Russo-Young.

Russo-Young was mindful of the intense feelings experienced during teen years.  “I think it’s a time in one’s life where we ask ourselves who we want to be in the most vivid manner,” she said. “And I believe that these are questions that are important to carry with us through all stages of life as well.”

While there is romance and humor, this is a tale that delves deeper than most teen dramas. “Part of what was exciting to me about making a movie that takes place at this particular age is that it’s a time of intensity and drama,” said Russo-Young. “It’s a moment when your peer relationships can feel like life or death. And because of this, I think teens are often more connected to what it means to be alive than we are at other times in life.”

The emotional touchstones also spoke to the young stars. The first person narrative keeps the focus trained on Samantha “Sam” Kingston, played by young star-in-the-making Zoey Deutsch. Deutsch, the daughter of former teen actress Lea Thompson, was moved by the emotional elements of the story. “’Before I Fall’ is thoughtful, painful and beautiful,” said Deutsch. “It sort of makes you feel a multitude of things. It also has some beautiful ideas that stick with you for a long time.”

Her co-stars agree. “It’s relatable, dramatic and mysterious,” said Kian Lawley, who plays Sam’s love interest Rob.  No typical teen story, Sam’s trajectory is a complicated one. “Sam begins the movie as a follower, a member of the herd who is doing what her social milieu demands: having all the right friends, going to all the right parties, picking on all the losers,” said Russo-Young. “ She’s someone who disastrously plays by the rules of her group without any self-reflection. There’s the idea that life will carry her along and that everything will work out for her without her having to live authentically.”  But the realization begins to dawns on Sam that there is more to life than the superficial existence she is living. “Over the course of the story, she comes to realize who she wants to become, and that becoming is a permanent process,” Russo-Young says.

LAUREN OLIVER is the New York Times bestselling author of the YA novels Replica, Vanishing Girls, Panic, and the Delirium trilogy: Delirium, Pandemonium, and Requiem, which have been translated into more than thirty languages. The film rights to both Replica and Lauren’s bestselling first novel, Before I Fall, were acquired by AwesomenessTV.   Lauren is also the author of novels for middle grade readers: The Spindlers; Liesl & Po, which was an E. B. White Read Aloud Award nominee; and the Curiosity House series, co-written with H. C. Chester. She has also written one novel for adults, Rooms. A graduate of the University of Chicago and NYU’s MFA program, Lauren Oliver is also the
cofounder of content development company Paper Lantern Lit. You can visit her online at http://www.laurenoliverbooks.com.

IMAGES AND INFORMATION COURTESY OF ELEVATION PICTURES AND HARPERCOLLINS CANADA. I ALSO WANTED TO SAY A BIG THANK YOU TO HARPERCOLLINS CANADA AND ELEVATION PICTURES FOR INVITING ME TO THE ADVANCED SCREENING OF THIS FILM! AND FINALLY, THANK YOU TO MY FOLLOWERS FOR READING MY REVIEW! AS THIS IS MY FIRST FILM REVIEW, I WOULD APPRECIATE ANY FEEDBACK YOU COULD GIVE ME. ARE YOU GOING TO SEE THIS FILM? HAVE YOU READ THE BOOK ALREADY? WHAT DID YOU THINK? OR DO YOU PLAN ON READING THE BOOK BEFORE WATCHING THE FILM, OR THE OTHER WAY AROUND? HOW COME? LET ME KNOW YOUR THOUGHTS IN THE COMMENTS BELOW!

5 thoughts on “Before I Fall (Film Review)”