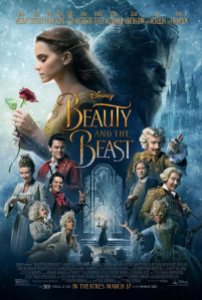 Synopsis:  Disney’s animated classic takes on a new form, with a widened mythology and an all-star cast. A young prince, imprisoned in the form of a beast, can be freed only by true love. What may be his only opportunity arrives when he meets Belle, the only human girl to ever visit the castle since it was enchanted.

I have been very excited about watching this movie ever since it was first announced, and let me just tell you…it did not disappoint! I suppose my expectations going in, were high (but not too high due to the fear of setting them too high and getting disappointed). I had nothing to worry about however, because it was pure amazingness!

It was great to hear the songs which I enjoyed very much in my childhood gain new life in this live action version of the story. And the songs which they added to this particular re-telling were also good! I’ve been playing one of them more than some of the others, actually. The plot itself also had some additions which I very much appreciated, as it rounded the story out quite well (I won’t mention what these were, so that you can enjoy them for yourselves).

This film was visually and aurally pleasing, and they did a fantastic job of bringing the 1991 cartoon version to life. I was very happy while watching this film, and afterward felt fulfilled in a sense. This version had bits which satisfied the child in me, as well as the adult I am today, and I have been raving about this to anyone who would listen, ever since I left the movie theatre late last night, haha.

I believe that whoever was in charge of casting has made a great selection, as each actor brought a bit of the cartoon characters back, while also adding heir own unique touches to what the characters were in the 2017 version of the film. All of the speaking and singing voices of the actors were great for this film, and definitely up to par.

The effects were fantastic and just a joy to watch. There were many colourful bits, and even the darker, more gloomy scenes were enjoyable to watch. This movie was just a meal my eyes gorged themselves on, haha. I also really enjoyed that they kept that “20s musical” aspect of the “Be Our Guest” scene, like in the cartoon version. I’ve always been a fan of the excessive, synchronized bits in 20s musicals, and both the cartoon and live action “Be Our Guest” bits were very satisfying. I was bouncing in my seat in the theatre during this part just because I was so happy!

And last of all, I would like to address the controversy surrounding one of the characters in this film. Before watching the film, I had heard that there were rumours of a gay character, and that the film had been banned in Malaysia due to this rumour. I would like to say that while watching the film, the gay aspect of this character was so subtle, that I did not even realize what was happening with him until I remembered the rumour. Then some things clicked into place, and I had my “oooh” moment. It was so extremely subtle that some people may not even notice it to be honest. The fact that this has been cause to ban the movie in some parts of the world is just ridiculous. I wish that they had made the fact that this character is gay more evident, and that there should have been more gay characters in general. The story felt more realistic, because gay people exist, as much as some would like to deny it, and it’s 2017! I am embarrassed to be human at times like this.

I highly recommend this movie and hope that you will all watch it! I for one, will be trying to go watch it again this week or maybe next week! Also, I wanted to say that I am sorry to those of you who will be watching it late, or not at all, due to the film having been banned in certain countries because of the controversy surrounding it.

IMAGES ARE NOT MADE OR OWNED BY ME! THANK YOU FOR READING MY FILM REVIEW! HAVE YOU SEEN THIS MOVIE, AND IF SO, WHAT DID YOU THINK? OR ARE YOU PLANNING TO WATCH IT?  WHAT IS YOUR OPINION REGARDING THE CONTROVERSY INVOLVING THE FILM? HAS IT BEEN BANNED IN YOUR COUNTRY? OR ARE YOU REFUSING TO WATCH IT FOR PERSONAL REASONS? I’M VERY CURIOUS, SO PLEASE LET ME KNOW YOUR THOUGHTS IN THE COMMENTS BELOW!

14 thoughts on “Beauty and the Beast (Film Review)”